This site uses cookies to provide and improve your shopping experience. If you want to benefit from this improved service, please opt-in. Cookies Page.
Save Preferences 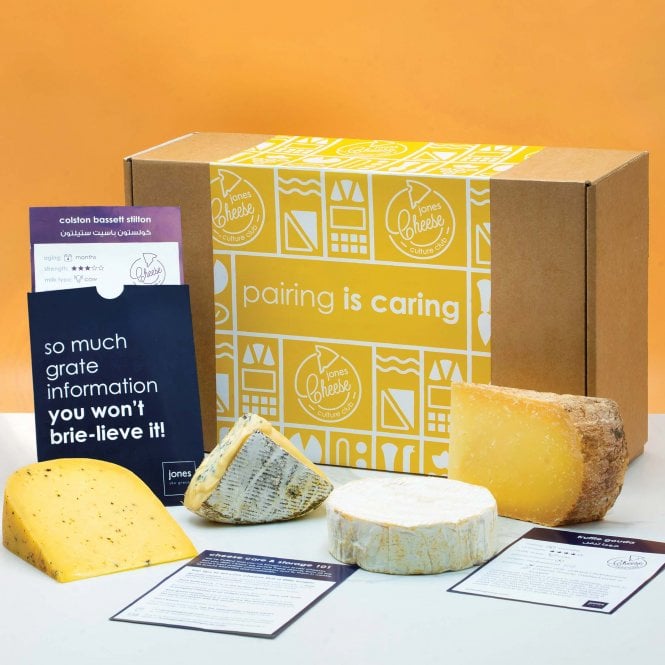 treat yourself or a friend to a tantalizing artisan cheese box.

* 4 exclusive, hand-picked seasonal cheeses, perfectly balanced with super stars and hidden gems along with two accompaniments to  match your cheese - serves up to 8 people.

* each delivery includes cheese notes featuring cheese pairs and care instructions along with a welcome letter.

The cheese selections for the month are:

blue murder: blue monday (now known as blue murder) is a scottish blue cheese that's named after the famous new order song. it was created by a celebrity – alex james of blur, the popular british band, along with a cheese expert named juliet harbutt. this blue cheese is made from cow's milk, and it matures for up to 8 weeks. during the maturation period, it develops a mellow, soft, creamy texture. the flavors are savory, slightly sweet, buttery, spicy, and rich. it has a kick of chocolate and malt.

bowland – raisin apple & cinnamon: bowland cheese is named after the forest of bowland, which is situated in the east of lancashire. a unique creamy cheese, made with apples, raisins and coated in cinnamon.

tunworth: This Camembert-style cheese needs no introduction. A genuine British cheese superstar, Tunworth can hold its own against anything France has to offer. Made by Stacey Hedges and Charlotte Spruce in Hampshire. It is loved by chefs and cheese aficionados in equal measure for its thin wrinkled rind and sweet flavour, which takes in vegetal, cabbagey notes.

cheese accompaniments include: savoury crackers and a sweet preserve.

serve them up at your next party, send them to a friend, or pair with some sweet accompaniments and crackers for a true taste of jones best.

Product Delivery: Deliveries are done within 48 hours. You will be contacted by a customer care adviser upon receipt of your order to arrange a suitable time for delivery.

Food Delivery: Food delivery links on this website are via our home delivery partners and any food delivery order will be fulfilled directly on their site. All food items will be delivered in our takeaway boxes.

Cheese Box Subscription Delivery: For subscriptions delivery will be on the last Thursday of subscribed months. Please ensure someone will be present to refrigerate the cheese within 1 hour of delivery.

Our catering team will get in touch with you to confirm the order and delivery date & time.

On receipt of your payment, Jones the Grocer will begin processing your order and we will send you a notification by email that the payment has been received and that your order is being processed. Where any payment you make is not authorised, you will be returned to the previous page on the Website and we shall not be obliged to provide the services. Please note that once you have made your order and your payment has been authorised you will not be able to cancel your order nor will you be entitled to a refund using the website.

If you wish to return a product, you must contact us within 7 days of receiving the product. For refunds, returns on non-retail products, cancellation penalties will apply. There will be no refunds for cheese subscriptions. Please contact us by telephone on the number shown on this website to amend or cancel the order details. The customer care adviser will be able to assist you in amending or cancelling the order if it will possible. All returns must be processed in store. We will not be able to arrange a courier to collect items for a return or exchange. Perishable items are not eligible for returns.

Please note that from time to time there may be delays with processing payments and transactions, on occasion this can take up to sixty (60) days to be deducted from your bank account.